A couple of years ago I had the great honor of being called up for Choson Torah in Jerusalem.

It was an emotional moment. Often an Aliya is a celebration of a new relationship such as a new child or grandchild, a new Choson or Kalah. This Aliya was a celebration of a renewed relationship with the Torah itself. I was touched by the honor and strengthened by the experience. I renewed my commitment to be loyal to the Kallah and to delve into and follow the Torah.

At the same time a strange thought went through my mind. I was called to read about the transition to a whole new life for the Jewish People. The Jewish people would enter the Promised Land and become a nation. We would no longer be nomads in a desert. People would have homes, farms and businesses. As our people enter our land with our Torah “we’ve only just begun”. The beginning was about to happen. Everything that happened until now – our exodus from Egypt, our standing at the foot of Mt. Sinai, our journeys through the desert, our building of the Mishkan -was all a preparation for the very great moment that we would cross the Jordan and enter Israel. As I followed the words of the Torah I began to panic. I saw the threads that tie the parchment to the wood. Life is beginning and the Torah is ending! How could the Torah end now? It is now that we need the Torah the most! It is here that the story begins!

And then the Gabbai called up the Choson Breishis and I suddenly understood. When we come in to Eretz Yisroel we can’t just keep on going – we need to start again, we need to be renewed. We need to turn the Torah back to the beginning. When we entered into Israel we were exhausted and needed to be refreshed and start anew. We needed to start from the beginning! “Breishis Bara Elokim”.

Breishis is a time for renewal. This is a difficult task but a task that we are historically qualified to perform.

The Jews have forever been called upon to renew. As tired as we were after wandering the desert, after being homeless in Bavel and after being thrown out of our homes in all of Eastern Europe, we were called upon to start again and we did. We can proudly tell the story of Jewish renewal.

The same is true in our personal lives. With the low points and disappointments of our lives – how can we just keep on going? The answer is – start again. We have the power to renew. Breishis Bara Elokim. We go back to the beginning.

The great Bais Yaacov who lived 150 years ago explained that the word Breishis actually means B – Reishis, “with a new beginning”. With Reishis. He explains: “With the power of renewal, G-d created Heaven and Earth”. The capacity for renewal is part of the energy G-d created at the very beginning. We can tap that refreshing energy and start anew – for the 5768th time.

Dedicated by my dear friends Rabbi Pinchus and Ruth Goldstien of Rochester, NY in honor of their grandchildren Eliana, Hadassa,Tamar,and Moshe Zelig and Shoshana Michal Goldstein. May Hashem bless them with a wonderful year to come. 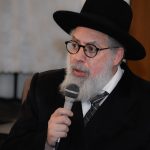