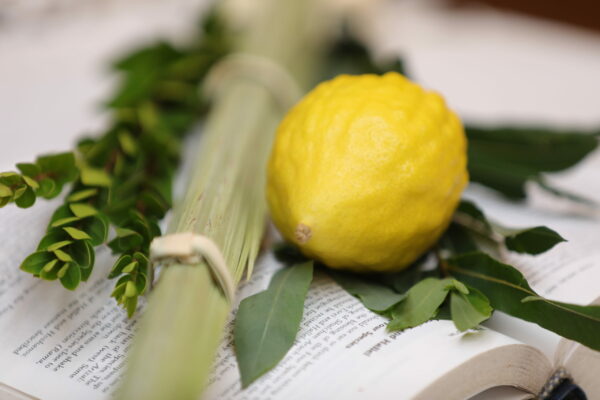 In Talmudic times the Sukos dancing at the Simchas Beis Hashoeva was reserved for the leaders of the generation. This was a Simcha the likes of which no other simcha can be compared. Raban Shimon ben Gamliel would dance in the middle. The Talmud reports that he would stand on his thumbs for long periods of time with his feet in the air – and the crowd would cheer him on. “What a Rabbi!”

Interestingly this great simcha took place during the Roman occupation, and even more interesting was that this very same Raban Shimon ben Gamliel was the first of the 10 martyrs that the Romans took during the same period of time as the simchas beit hashoeva – yet he was happy and he danced.

I’d like to share a thought. On Yom Kippur our feet are on the ground but our heads are in Shamayim as our hands extend to the heavens in prayer. On Sukos the great leader turned the whole thing upside down, his feet, his foundation pointed to the sky, his hands, his tools for action were entrenched in the ground. He choreographed a symbolism for life. He was part of this earth. He’ll enjoy it, and if need be he’ll suffer for it but at all times he’ll sanctify it.

Sukos should really take place right after Pesach, after all that is when we went out into the desert and were protected by the clouds of Glory. Conventionally, we explain that we would do this in April but it’s not the right weather. Everyone goes outside in the spring as the weather turns beautiful, but we want to prove a point so we go outside when it doesn’t make sense.

The Vilna Gaon offers a different explanation that is truly remarkable. It is true that the clouds of Hashem began protecting us when we left Egypt, but then we sinned. When we built the Golden Calf the clouds went away. That was on the 17th of Tamuz. We started to do Teshuva and finally on Yom Kippur, we were forgiven. Men and women began bringing donations for the Mishkan and 5 days later the Jewish people starting building the Mishkan. When G-d saw the building of the Mishkan he returned the clouds to protect us. That is why, says the Gaon, we celebrate now. It is not the clouds that we celebrate but the return of the clouds.

When we started building a Mishkan, a portable Shul, G-d knew that Yom Kippur took. So He gave us His clouds back.

As we transform from Yom Kippur to Sukos we move from the sublime to the real and practical. With this transition Hashem’s presence will take its permanent place in our lives and in our homes.

← Where Did All The Leaders Go? Soul Sacrifice →