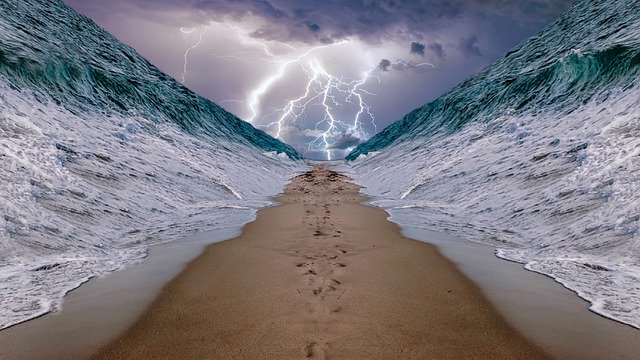 (לא ימיש עמוד הענן יומם ועמוד האש לילה (שמות יג:כב – There was a cloud that led Bnai Yisrael during the day, and a pillar of fire by night. The Gemara (Shabbos 23b) deduces from this posuk that the pillar of fire arrived before the cloud left, and the cloud arrived in the morning before the pillar of fire came. The Gemara goes on to relate that RavYosef’s wife once lit Shabbos candles very close to nightfall. Rav Yosef quoted our posuk to her, seemingly indicating that the Shabbos candles should be lit while it is still day.

This is in fact better understood if we look at the end of the Braisa, that is not quoted in the Gemara. The Braisa says בא הכתוב ללמדך דרך ארץ אל ערבי שבתות that the fire should be lit while the cloud (meaning the day) is still there. So the drasha explicitly applied the lesson to Shabbos candles.

The Gemara completes the story of Rav Yosef’s wife; the next week she lit candles very early. An elderly scholar told her that it was taught that one cannot be early or late. The Torah Temima asks – saying not to be early makes sense, but obviously late doesn’t work – it’s Shabbos already! He explains that he was referring to Tosfos Shabbos in general. Although it is proper, and perhaps obligatory to add on to Shabbos, one shouldn’t add too much because then it is no longer apparent that you are adding to increase Kedushas Shabbos, it may be for convenience or some other reason. Hence, when we say that It shouldn’t be too early or too late, we are not talking about Shbbos candles per se, rather the entire concept of Tosfos Shabbos, not too early on Friday and not too late on Saturday Night.

(כי אשר ראיתם את מצרים היום לא תוסיפו לראותם עד עולם (שמות יד:יג – Hashem said, “As you have seen the Egyptians today you will never see them again forever. This seems to be a reassuring promise. However, Rav Shimon bar Yochai (JT sukkah 5:1) says that this is one of the three places the Torah warns against returning to Egypt. This is clear in Parshas Shoftim where it says “Hashem has warned you not to return to mitzrayim” However we don’t find such a warning anywhere but here. (Torah Temimah)

We know that they did in fact see the Egyptians again, shortly thereafter, when they were expelled onto the beach. The Zohar understands from here that not ‘seeing’ someone is only when they are still alive, not when they are dead.

The halachic implication of this is that if one makes a vow that they will never see a specific person again; nonetheless they may see them after they are dead when halachically necessary. [Generally speaking, Halacha frowns upon viewing cadavers].

(מה תצעק אלי (שמות יד:טו – The Gemara (Sotah 37a) tells us that as the Egyptians were closing in on the Jews Moshe Rabbeinu engaged in lengthy prayer. Hashem said to him – my beloved are (about to be) drowning in the sea and you are davening? Moshe responded, so what should I do? And Hashem answered – tell the Jews to go forward!

Prayer vs Action is a longstanding philosophical debate. It would seem from here, that when one is at a loss for a practicable solution, as Moshe was prior to Hashem’s instruction, lengthy prayer is the correct response. However, when there is an obviously practical thing to do then a short prayer and action is indeed the correct approach.

(ויבאו בני ישראל בתוך הים ביבשה (שמות יד:כב – The Gemara (Berachos 54a) learns from here that one who sees the place where we crossed the sea has to praise Hashem. Indeed, the halacha is that one makes a beracha of ‘sheasa neis leyisrael bemakom hazeh’ However in the Sheiltos (Parshas Vayishlach) it learns this halacha from a later posuk that was said after kriyas yam suf. From here the Netziv deduces that the beracha should be made at the place where the miracle finished specifically. The Torah Temimah questions this; it is not mentioned anywhere in the Gemara and Poskim as it should have been, and he brings various sources that the whole path of the miracle is eligible for blessing.

(זה קלי ואנוהו (שמות טו:ב – The Jews proclaimed that “This is my Lord and I will beautify Him”. From here Chazal learn several different lessons. It is impossible to beautify Hashem, but we do so by making our mitzvos beautiful. A beautiful sukkah, lulav, tzitzis, and sefer Torah are the examples that the Gemara (Shabbos 133b) gives. The Halacha is that one should spend up to 1/3 more for a more beautiful mitzvah. If something is required then it doesn’t fall under the penumbra of beautifying, and therefore it is important to ascertain what is required and what is for additional beautification purposes.

Another interpretation given by the Gemara (ibid) is to emulate Hashem; imitatio Dei. Rashi explains that we see this in the word ואנוהו it can be read as אני והוא I am like Him. Just as He is compassionate, so should we be. Just as He clothes the poor and feeds the hungry, so should we, and so on.

The Torah Temimah suggests that this too is a way of beautifying Hashem. By practicing and engaging in acts of compassion and loving kindness, traits that Hashem has shared with us, it brings glory to Him. He further suggests that this interpretation compliments the previous one. If one only beautifies their mitzvos, but acts toward one’s fellow in a decidedly ungodly manner, that will be a chillul Hashem, quite the opposite of what is intended. When we beautify mitzvos, in the relationship between man and God, and thus beautify Hashem. And we act in a Godly manner in our relationship between man and man, and thus beautify Hashem there as well.