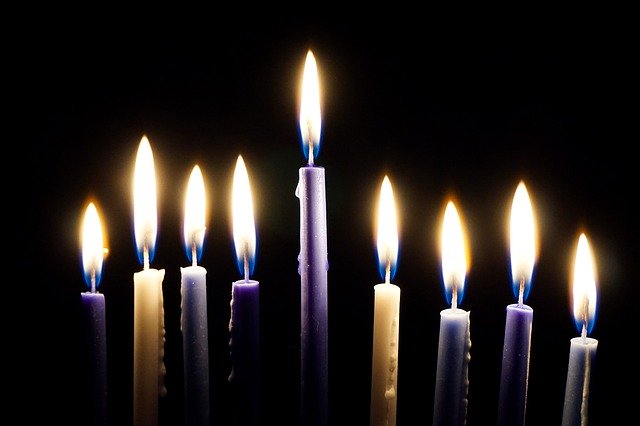 Even though we usually light Chanukah candles once it’s dark, obviously that is impossible on Friday, we therefore have to light before dark. We will discuss some of the associated Halachos.

If one forgot and the woman of the house lit Shabbos candles then the man may still light the Menorah. If the woman was intending to light Chanukah candles she may not, because she has accepted Shabbos, and she should ask someone else to light for her. The lighter should make the first Beracha and she makes the second (and when applicable the third).

However if a man lit the Shabbos candles he would be thrust into the above dispute. The Mishna Berura concludes that ex post facto he may light the Menorah even if he already lit Shabbos candles.
One has to make sure to have enough oil in at least one (and preferably all) of the candles to burn until a half hour after nightfall.

One may not light the menorah before Plag Hamincha, which is one and a quarter halachic hours before sunset.

This would seemingly depend on a much greater question. Why is it that we light the Menorah when we do, after Plag Hamincha?

According to many we are commemorating the lighting of the Menorah every evening in the Bais Hamikdash, which took place after the daily afternoon offering was brought, in which case our lighting of the Menorah would have to be after Mincha, which corresponds to that offering. This reasoning is offered by the Shaarei Teshuva in the name of the Birkei Yosef.

However others understand that when we allow one to light in a time of need from Plag Hamincha on, it is because we are ruling according to the opinion that Plag Hamincha is already night time, and therefore if I go and daven Mincha after lighting the Menorah I would be engaged in seemingly contradictory behavior. Some contemporary poskim (see Mishna Berura Hamevuar) argue that according to this line of reasoning the Halacha would prefer a ‘contradictory’ davening with a minyan than a properly ordered one without. However, in Shaar Hatzion the Mishna Berura quotes this line of reasoning as the primary one when explaining why to daven Mincha first.

[This discussion is relevant to bringing in Shabbos early, which will hopefully be the focus of a future article].

In a nutshell, it would seem to be appropriate to daven Mincha, if need be without a minyan, before lighting the Menorah. This is indeed the opinion of my Rebbe and other contemporary Poskim.

However it is noteworthy that the Shelah in his commentary on the Siddur and Rav Ovadia Yosef explicitly write that the preference to daven Mincha first is only when one is able to do so with a Minyan.

There is one major exception to this rule – if by davening Mincha one will delay lighting the Menorah until very close to or after sunset then one should most definitely light the Menorah first.